Across the nation, high schools induct students to their various honor societies. The Academy of Information Technology and Engineering (AITE) is proud to have five honor society chapters, with one of them being the Sociedad Honoraria Hispanica (The Spanish Honor Society). The SHH is coordinated by Mrs. Raquel Hernandez Bonessi who founded this honor society six years ago. Being one of the largest honor societies at AITE, the SHH is composed of passionate Spanish learners who plan to utilize the Spanish skills which they have attained in their future.

This year’s induction ceremony was a bit different than any other ceremony. The Covid-19 pandemic shifted the format of events at school this year and as a result many award ceremonies were either held outside or virtually. The SHH was lucky to have their induction ceremony outside on a sunny evening, thanks to the guidance of Mrs. Bonessi. Inductees from 2020 were finally able to have a proper in-person ceremony rather than the virtual Youtube video ceremony from last spring. There were 18 2020 inductees at this year’s ceremony being officially inducted into the society, many of them being juniors and seniors. Furthermore, 15 sophomores and juniors were inducted into the honor society this year and received a certificate and patch acknowledging their acceptance into the honor society. The two cohorts of students worked extremely hard throughout high school and have shown exemplary skills in Spanish. Moreover, their character has shone through making them more than qualified for membership. The class of 2021 seniors were awarded their graduation cords and five seniors received their Seal of Biliteracy to reward their hard work over the past few years. 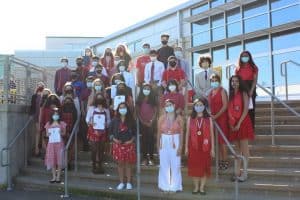 Students enjoyed this time to celebrate their accomplishments with their friends and family. The Sociedad Honoraria Hispanica is looking forward to what is to come in the future and they cannot wait to see what the new members have to offer.